In what many consider a time of political uncertainty, many proponents of sustainable development are asking if sustainability is sustainable under the Trump administration. However, many opponents are taking the opportunity to state that sustainability itself is unstable as a concept and pushing for the removal of environmental rules and regulations. Such is the country’s atmosphere amid the news that EPA regulations rolled back under Trump.


Since assuming office January 20, 2017, the Trump Administration has lost no time in corralling the Environmental Protection Agency (EPA) and throttling back the prior administration’s green agenda. Indeed, EPA regulations rolled back under Trump. The list of environmentalists’ grievances grows monthly: On January 24, the newly sworn-in President Trump signed an executive order to expedite the environmental permitting process for infrastructure projects. This order included memorandums specifically related to expediting the construction of the Keystone XL pipeline. On March 24, President Trump announced the granting of the permit. Notably, in February, “EPA antagonist” Scott Pruitt was confirmed as head of the EPA.

EPA Regulations Rolled Back Under Trump — The Details 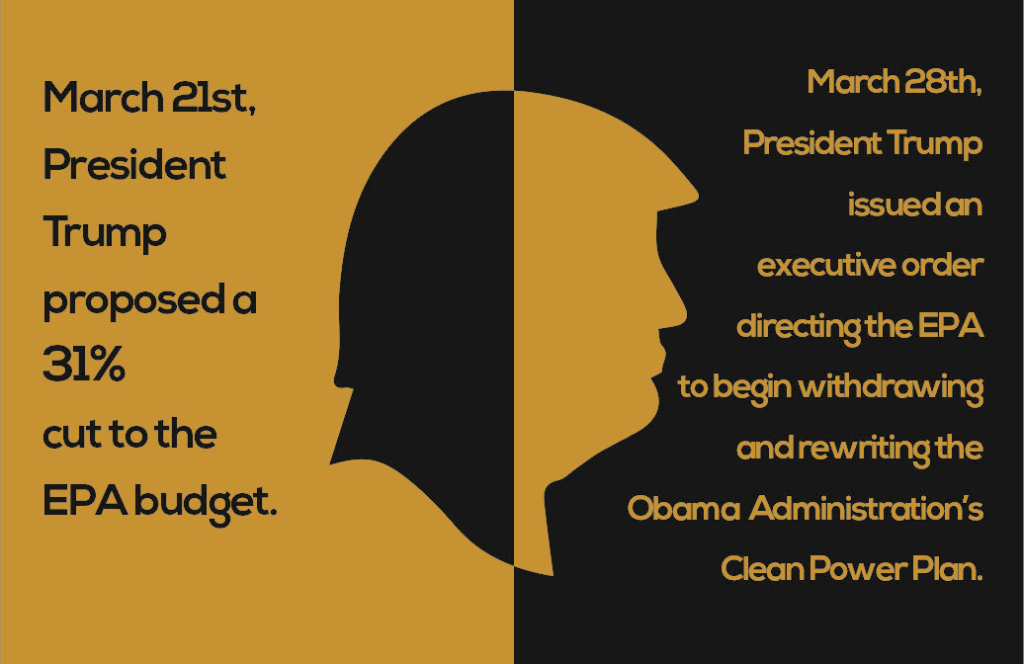 Here are the details: On March 21, President Trump proposed a 31 percent cut to the EPA budget. At a ceremony on March 28, the president issued an executive order directing the EPA to begin the lengthy process of withdrawing and rewriting the Obama Administration’s Clean Power Plan. The Obama Administration’s plan would have resulted in the shutdown of hundreds of coal-fired power plants, prevented the construction of new facilities, and furthered the development of large-scale wind and solar farms.

On April 26, the president issued an executive order directing the Secretary of the Interior to review any national monument designations made since 1996 of over 100,000 acres. (One of Obama’s last gestures before leaving office was the designation of national monuments in Nevada and Utah.) On April 28, Trump ordered the Secretary of the Interior to review limits on where the U.S. allows offshore energy development, including drilling and exploration.

Additionally, this executive order revoked stringent safety rules put into place after the 2010 BP oil spill in the Gulf of Mexico and set the Arctic drilling back on the table.

This breathtaking litany of reversals has left many people who are concerned about sustainability wondering what Trump will do next. The president has repeatedly bashed the 2015 Paris COP21 climate accord as “a one-sided deal”. On April 29, Trump had announced that in two weeks he would make a decision about the U.S.’s role in the accord.

On Earth Day, April 22, 2016, the Paris climate accord was opened for signature. Markedly, as of April 2017, 195 United Nations Framework Convention on Climate Change (UNFCCC) members have signed the Paris climate agreement—of which 144 have ratified it. It is too soon to tell how many of these nations will actually comply with the agreement. What we do know is that many of the signees, including China, are pressuring the U.S. to live up to the climate commitment made by the Obama Administration.

The news that EPA regulations rolled back under Trump is just one part of the sustainability discussion. Veritably, governments in predominantly capitalist countries can exert only so much control over sustainability. Businesses have a critical role to play, as they are directly either managing or exploiting resources. Multinational corporations have large environmental footprints that cross many geographical borders and huge pocketbooks with which to exert political influence. Many proponents of sustainability say businesses must embrace the new paradigm of sustainable development—some actually go so far as to say capitalism must die.

Political ideology, government control and business paradigms are just three issues complicating the question of sustainability. Other factors to consider include who determines what sustainability looks like and how it is measured, monitored, and enforced. Given the complexity of the issue on sustainability—particularly, amid the news that EPA regulations rolled back under Trump—and the impact on global economic development, Bold Business must ask the questions: What is sustainability? And is it humanly possible?