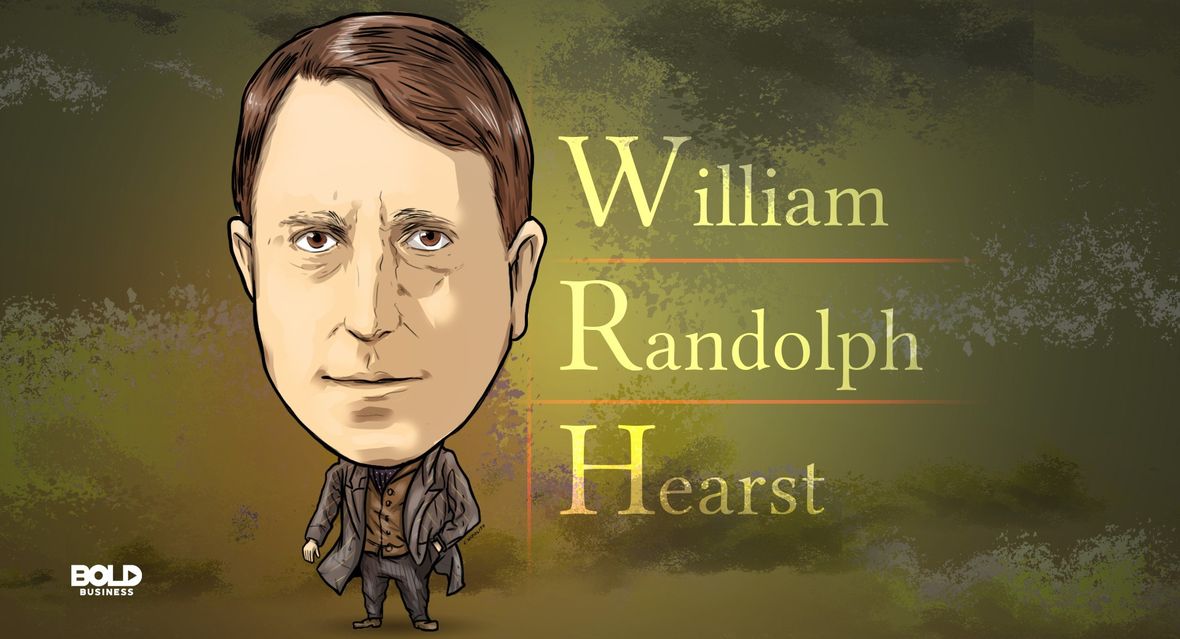 Bold leadership is not subtle, and often, it explores new paths never before imagined. Bold leadership keeps a keen eye on the potential for innovation and change and accepts challenges to advance society. And bold leadership advances others’ opportunities in the process without requiring recognition or praise. Few exemplify these qualities better than William Randolph Hearst.

Without question, Hearst was a revolutionary and innovative leader of his day. He thrived in an era that not only saw great technological advancements but also the Great Depression. Many would describe him as a true Renaissance man, exploring and excelling in many aspects of life. Through both trials and tribulations, Hearst was able to persevere and attain tremendous success. Thus, exploring his uniquely bold leadership style offers a chance to appreciate the true genius of the man. This week’s Bold Leader Spotlight goes historical once more, with the light shining squarely on Hearst.

Championing Change Through an Unknown Landscape

A notable feature of bold leadership is the desire to challenge the status quo and to embrace change. Hearst certainly exhibited these qualities as he grew his media empire. What began as a couple of Hearst Communications’ newspapers grew into more than two dozen over time. And at the peak of Hearst’s success, one of every four Americans received their news from his news sources. To achieve this feat in such a short time certainly speaks of Hearst’s bold leadership talents.

Of course, his willingness to champion change did not stop there. In addition to his newspapers, Hearst also expanded magazine publications including Harper’s Bazaar and Good Housekeeping. He also showed innovation and risk-taking in launching the first radio broadcasting programs as well as movie newsreels. The world recognizes him for being responsible for the first comic strip syndication, which still enjoys success today. In essence, by pursuing the latest technologies and opportunities, Hearst highlighted this important attribute of bold leadership.

Empowering and Showcasing Others’ Talents

Hearst appreciated the value of other people as well. In his later career, he pursued politics where he was elected twice as a U.S. Congress Representative for New York. Likewise, he became the governor of New York thereafter. His bold leadership in politics repeatedly sought to champion others, especially those of lesser economic means. His belief that everyone deserved equal opportunity and an equal voice highlighted his bold leadership views in empowering others.

At the same time, this same bold leadership trait could be seen in other decisions that Hearst made. One of the reasons his early newspaper publications sold so well was because he sought out the best talent. His publications highlighted writers like Mark Twain, Jack London, and Ambrose Bierce. As part of his bold leadership, Hearst recognized others’ potential and delegated tasks to them accordingly. In this way, he was able to best utilize resources while advancing others toward their own success.

Focused on Results for a Better Society

For Hearst, he valued many things in life. Specifically, his vast art collection was among one of the most impressive in the world. Likewise, he spent 28 years of his life in pursuit of designing and constructing the infamous Hearst Castle. Without question, he believed that society flourished when such beauty and aesthetics were pursued to perfection. And his bold leadership similarly appreciated quality when it came to business results and their effect on his audiences.

It’s no secret that the Great Depression significantly impacted Hearst’s conglomerate. Hearst Communications were challenged during this time because the newspapers alone were no longer self-sufficient. But this did not deter Hearst’s resilience and bold leadership. He responded by producing over 100 films through the 1940s and was a pioneer in television. Despite his setbacks, he continued to focus on the objectives that furthered American media. And through these achievements, the American entertainment industry advanced substantially.

Bold Leadership and a Bold Legacy

Bold leadership may come in different settings and at different times. But the aspects that embody bold leadership does not change. The ability to challenge norms, embrace change, empower others, and make the world a better place are all important features. As evident from the life that Hearst chose to live, he thus fits the bold leadership mold. Not only did he explore the cutting edge of media, but he did so with ethics and values. And in the process, he left an incredible legacy of success that positively affected a nation.

Hearst died in 1951 with an estimated net worth of $3.1 billion. But this was not the only legacy that he and his bold leadership left behind. For one, he had five children including one who would become a Pulitzer Prize winner. And in addition to his children, Hearst touched thousands of lives exemplifying the true nature of bold leadership. It is these attributes that have left the most lasting impression. And it is a major reason William Randolph Hearst is considered one of the most powerful leaders of his era.