People enjoy food – what used to be just a source of nutrients is now an industry worth billions of dollars. The meat industry alone earns $90 billion, but with the rise of a health-conscious and cruelty-free population, they are about to experience one of the biggest disruptions around. With countless meat substitutes being created left and right, the bold idea of a meatless world may soon become a reality. 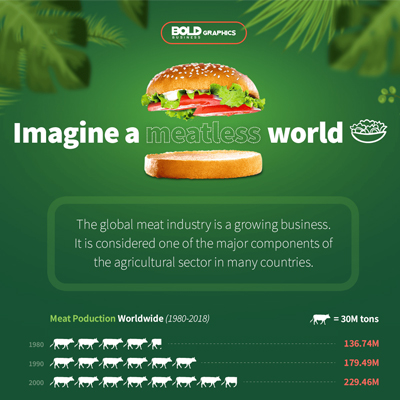 At the moment, meat eaters still make up majority of the population. Analysts say that in 2018, the United States will eat even more meat than ever – the US Department of Agriculture (USDA) estimates that an average person will consume about 222.2 pounds (100.8 kilos) of it this year. Additionally, about 30% of global consumption come from beef, chicken, pork, and other animal proteins.

David Portalatin, a food industry adviser for NPD Group, stated that protein is the number one priority of most consumers today. People are more into meat, eggs, and dairy than sources of carbohydrates, and the USDA says people will eat a daily average of 10 ounces of meat and poultry this year. The recommended amount is 5 to 6.5 ounces, so that’s nearly double the quantity.

The demand for meat is even higher than people realize, but factors like the health industry boom and the increasing number of people becoming more conscious about the effects of slaughtering animals does to the environment has opened the door for meat substitutes to creep in and change the game.

“Ten years from now, there will be higher plant consumption, but beef will always be king,” said David Friedman, founder of the Chicago-based meat substitute company Epic Burger Inc. “People are always looking to put more protein into their diets. But they want high quality and transparency in the food they’re eating.”

There Is More to It than Meat

It’s not common knowledge, but meat actually impacts the environment more than any other food for human consumption. This is mainly because turning livestock into food require a lot of energy, land, animal food, and water compared to raising and transporting plants or plant-based food and drink products.

To create a quarter-pound burger, there needs to be about 6.7 pounds of grains, 52.8 gallons of water for animal consumption and feeding the crops they eat, 74.5 square feet of land for them to graze and to grow the crops they eat, and enough fossil fuel energy that can power a microwave for nearly 20 minutes.

This all points to one thing: meat production needs to slow down and find a way to become more efficient. In lieu of this, especially for a mainly meat-eating species, people need to find other sources of nutrients.

Today, seven of the largest meat companies have a combined $71 billion in market capitalization. Tyson is valued at $25.65 billion followed by Hormel at $15.96 billion, based on data from CB Insights. National Beef, Pilgrim’s, and JBS are behind at $9.17 billion, $7.72 billion, and $6.9 billion respectively. Not too far behind are Sanderson Farms and Bachoco at $3.41 billion and $2.95 billion each.

Even with such big names still leading the industry, “clean meat” startups are finding their way into becoming more mainstream. Impossible Foods is probably one of the first names people would think of, as their Impossible Burger has received praise for looking and tasting like the real thing. People end up consuming eco-friendly meat and getting more nutrition without sacrificing taste.

Impossible Foods’ chief executive officer (CEO) Pat Brown says the company is getting rid of prehistoric methods of creating food. “We think of it as meat made a better way,” he said, “using animals to turn plants into this very special category of food.”

Memphis Meats, the Richard Branson and Bill Gates joint investment based in San Francisco, is also helping tackle the animal-friendly business by producing meats directly from animal cells – with their tech, there’s not need to raise and then slaughter animals to produce beef and poultry.

Other names are trying to get funding and support as well. Finless Foods are creating faux fish meat, New Wave Foods are creating “shrimp” from algae and pea protein, and Odonotella is creating algae-based salmon. Tokyo-based Shojinmeat Project is also joining the ranks, teaching high school students how to culture animal cells at home and converting them into meat substitutes. Companies like Perfect Day want to create milk even without cows, a bold idea that raised over $2 million from venture capitalists.

This food movement has created other possible solutions as well. Swedish company Plantagon has been designing “skyscraper farms” – the bold idea of farming within city limits. Phoenix, Arizona now has a similar company called Farmiculture, a company that converts commercial warehouses into vertical greenhouses. These hydroponic spaces maximize resources, virtually eliminating the need for tractors and wasteful irrigation systems.

In addition to city farming, companies are also looking into organic biofertilizer coming from algae, possibly providing a complete solution to the oil consumption and chemical fertilizer issues. A University of Texas at Austin study found how algae-based fertilizer yields more crops compared to their chemical counterparts as well – making food not only safer, but also allows farmers to more easily meet their bottom line.