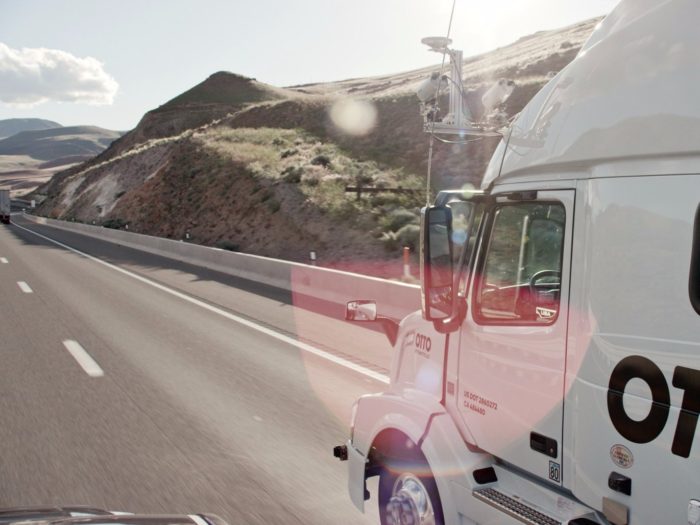 The trucking industry is the lifeblood of the U.S. economy. Nearly 70% of all the freight tonnage moved in the U.S. goes on trucks accounting for $671 billion worth of manufactured and retail goods transported by truck in the U.S. alone. Across the US, truckers collectively haul more than 10bn tons of freight each year, but it’s a tough job – the hours are long and lonely, the pay is low and the lifestyle is sedentary. In many ways it’s a job ripe for disruption; robots v truckers.

Much has been written about driverless cars with versions created by Google, Tesla and Apple, but driverless trucks are much more likely to appear on America’s roads sooner. To move 9.2 billion tons of freight annually requires nearly 3 million heavy-duty Class 8 trucks and over 3 million truck drivers. (There are 3.5 million registered truck drivers in the U.S. today.) As the value per ton of a shipment rises, the cost of having a valuable cargo tied up in transit increases, so shippers are likely to shift more of their shipments to faster, more expensive modes like truck and air. Estimates are the trucking industry has an operating ratio of 95.2. This means for every dollar in revenue the trucking company has a cost of 95.2 cents. Leaving them with a profit of 4.8 cents of every dollar.

Using self-driving vehicles could not only improve operating ratios but improve other efficiencies and reduce downtime, accidents and driver-related delays. Major roads in the next 20 years will likely be redesigned to have dedicated driver-less vehicle lanes to enhance both efficiency and safety. In San Francisco, former Googlers formed a start-up called Otto that promises to retrofit existing trucks for around $30,000. The prevailing earnings of truck drivers range between $30,000 and $40,000 per year. In May, 2015 the first self-driving truck hit the road in Nevada. In April last year a convoy of automated trucks drove across Europe arriving in the port of Rotterdam using an automated driverless technology called platooning that employs sensors, GPS, and cameras. The lead truck determines the rate of speed and other factors that trigger when the remaining vehicles in the convoy slow down or adjust speed.

The trucking industry claims that driverless trucks will not see the road in significant numbers anytime soon owing to the fact that there are times when complicated maneuvers demanded of trucks are best done by drivers. Also the driving public is apt to be nervous driving near trucks with no human drivers directing them. It’s a case of technology overtaking societal norms while changing the economics of business.